Located in the east end of Ottawa with a population of approximately 9,000 people, Blackburn Hamlet has a peaceful, country village feeling. With just a ten minute drive to downtown Ottawa and access to an array of amenities, Blackburn Hamlet is a great place to call home.  Parks and bike paths run continuously through the neighbourhood and most amenities are within walking distance for its residents. 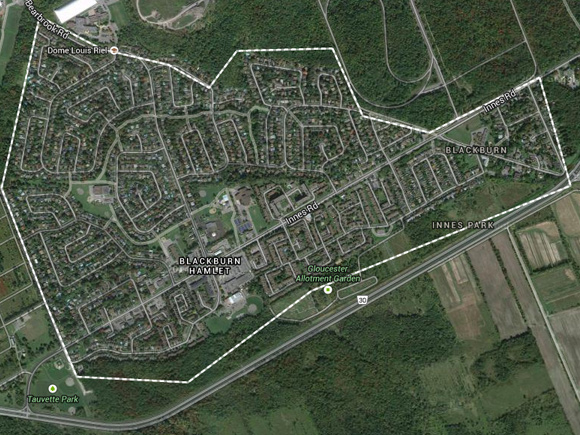 Restaurants in the area include: Blackburn Arms Pub, Jumbo Restaurant, Shawarma Prince, and Wally's Dining Lounge. In addition to stores, restaurants and other conveniences, there are many schools, parks and other outdoor recreational areas.

The area is surrounded by the NCC Greenbelt, the Canadian Federal Conservation Authority lands and property owned by the Royal Canadian Mounted Police comprising over 250 kms. of hiking and cross country ski trails. Nearby neighbourhoods include: Beacon Hill, Rothwell Heights, Gloucester, and Orleans.

Blackburn Hamlet is full of recreational activities that can be enjoyed no matter what the season. A series of soccer fields, known as the Hornet’s Nest are available, also hosting international soccer tournaments. For the past 25 years, Blackburn's residents have maintained a cooperative garden, also located at Green's Creek.

Located in the middle of the fields and woods of the Hornet's Nest, you will find an air-supported indoor recreation dome (SuperDome).

The neighbourhood's forest areas are also home to several geocache locations. In the winter time, you will find one of the region’s most sought-after toboggan hills at Green’s Creek.

Blackburn Hamlet has an active community association. Throughout the year, the Blackburn Community Association organizes an array of events such as musical performances, spring cleanups, and a fair.

Getting Around Blackburn Hamlet

Blackburn Hamlet runs primarily on OC Transpo route 94 which provides easy access to locations across the city. There are also a variety of local and express routes. The Ottawa International Airport (YOW) is approximately a 30-minute drive.

Live in Blackburn Hamlet? Find out what your home is worth.