Located in Ottawa's west end on the Rideau River, Britannia Village offers an eclectic mix of homes, river access, and an array of recreational activities. The neighbourhood is full of early cottage flare, surrounded by water, forest, and steep hills. 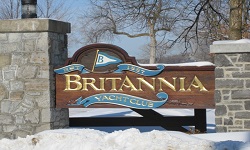 In the early 1820s, the community grew around property developed by Capt. John Lebreton; a grist mill, saw mill, and a house he named "Britannia." The Canadian Pacific Railway line prompted significant growth in the neighbourhood, with its first subdivision built in the 1870s. Until after WWII, the area was primarily a summer cottage community when many veterans returned to the neighbourhood seeking housing. In 1950, the village was annexed to the city of Ottawa. During the 20th century, the neighbourhood grew substantially, and was soon surrounded by the western suburb of Nepean.

The neighbourhood is well-known for its stunning architecture, with a number of them designated as heritage landmarks, incluiding the Brittania Yacht Club, one's of Canada's oldest yacht clubs. Other heritage buildings include:

The neighbourhood has no shortage of recreational activities. In Britannia Park, you will find loads of greenspace, perfect for a picnic. Located between Carling Avenue and the river, the park is accessible on Ottawa's bike path system. In addition, the park features Brittania Beach, a great spot to soak up some sun and enjoy the beautiful surroundings.
The Ottawa Folk Festival is also held in Britannia Park, featuring four days of live music with various arts and craft vendors.
Need to grab a bite to eat? Britannia Village offers great restaurants nearby including:
For shopping, Pinecrest Shopping Centre is just a short drive away. Featuring IKEA, Chapters, Corbeil Appliances, Sears Home Decor, among many others, this is a great place to find whatever you may be on the hunt for!

Getting Around Britannia Village

Given its location, Britannia Village provides quick and easy access to various points across the city. Downtown can be reached via car in 20 minutes, or 35 minutes by bus. If heading to the Ottawa International Airport (YOW), you can get there in 25 minutes by driving, or 55 minutes by bus. OC Transpo routes 2, 16, 85, and 97 offering convenient service.

Live in Britannia Village? Find out what your home is worth.