One of Ottawa's most unique neighbourhoods, Dow's Lake is primarily a large park situated near the opening of the Rideau Canal into Dow's Lake. Once known as "Dow's Great Swamp," earth dams were constructed at the end of the swampy wooded area, essentially flooding the swamp and establishing the Lake. Today, you will find a number of large homes with vast lots lining the eastern corner of Dow's Lake. If you enjoy the outdoors, Dow's Lake is a great neighbourhood for you. 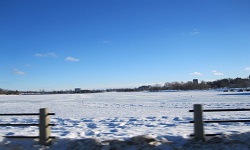 Located west of The Glebe, Dow's Lake is just beyond the Experimental Farm. It is at the south end of Preston Street, south of Carling Avenue, to the west of Bronson Avenue. At the south end of the Lake, you will find Carleton University.

Other nearby neighbourhoods include Little Italy and Centretown.

Living in Dow's Lake provides the ultimate enjoyment for the outdoor enthusiast. The Dow's Lake Pavillion, located at 1001 Queen Elizabeth Drive, is the hub of the neighbourhood, offering a great place to relax and enjoy the picturesque Rideau Canal. Here, you can enjoy an abundance of recreational activities throughout the year. The neighbourhood hosts a number of events, including the well-known Canadian Tulip Festival each May.

Getting Around Dow's Lake

Access to transportation is readily available within the Dow's Lake neighbourhood, with OC Transpo serving primary routes 4, 6, 85, and local routes 101 and 102. The neighbourhood is also in close proximity to Highway 417. You can access the downtown core in 10 minutes by car, or 25 minutes by bus. The Ottawa International Airport (YOW) is a short 15 minute drive away.

Dow's Lake is comprised of a number of large family homes ranging in price up to over $1 million. The neighbourhood also has several condominium buildings, with units starting at approximately $349,000.

Live in Dow's Lake? Find out what your home is worth.